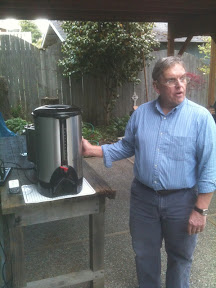 The basic idea is this: a simple, mostly automated all-grain brewing system that could be used in an apartment to turn a big bag of grain into a frothy keg of beer with the least amount of work possible. And, it turns out, we did it. But like all simple ideas, there is a much longer story. It all starts with my dad and his fetish for Crock Pots.

About three years ago my dad got a new Crock Pot, one of the large size ones they carry at Costco. As he tends to do with things like this, pretty soon he began ponder the extremes of Crock Pot cooking--and just how far one could push the limits of the Crock Pot. Many of the details of this years-long experiment are not fit to print, but let me just say the culmination was one Thanksgiving where every dish on the table, including the turkey (I'm not kidding!), had been prepared in a Crock Pot. Even he will admit it had gotten a little out of control. 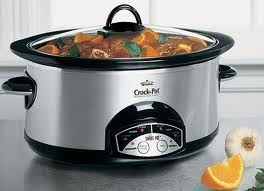 And the great Crock Pot experiment was not limited to that actual device, but soon began to include other methods of automated cookery--including an electric pressure cooker and an amazingly successful experiment to turn an electric "Fry Daddy" into a Sous Vide water bath cooker (retail versions of which cost in the thousands). That particular invention was created via multiple late night Skype video chats between my father and my brother Josh in California--in actuality Josh is usually the brains behind the operation and my father is the bankroll and the guy crazy enough to actually build these crazy things. 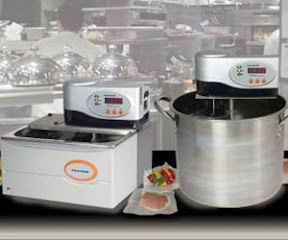 This "automated apartment beer brewing system" developed similarly through late night Skype conversations between my dad and brother. It all started when my brother got a hold of a 100 cup percolator coffee pot from his church that was broken. He brought it home to fix, and started pondering how such a device could be used to make beer. As he and my dad discussed this over video chat, the idea started rolling--and they realized that an insulated pot would be even more effective, and the online research began. 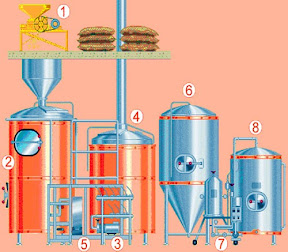 I suppose I should pause just for a second to explain the basics of all grain brewing so that the details of this experiment actually make sense. To make beer, one takes a large bag of grain (somewhere in the vicinity of 10 lbs or more for home brewing). Generally this is barley that has been malted (meaning sprouted and dried) so that the starches turn into sugar that can be leached out into a liquid, called "wort" (pronounced "wert") from which you make beer. This grain is then put into an insulated vessel, called a "mash tun". Most home brewers use the large orange drink coolers that coaches get dumped over their heads after winning football games. A "false bottom" is constructed in the mash tun so that the grains sit off the bottom, above the spout for the liquid. Hot water is added at precise temperatures so that the "mash" (grains soaking in hot water) reaches a certain temperature for a certain amount of time--somewhere in the range of 160°-180° for 90 minutes. This temperature and time converts the remaining starch in the malted grain into sugar, which then dissolves in the water to make the sweet liquid you ferment into beer. Usually this requires a complicated calculation that takes into account the amount of grain and how many quarts of 212° water you need to add (carefully!) to reach that range. Often you get over or under this temperature and have to trial and error your way to the target temp with hot or cold water. You need an insulated container so that once you hit this temperature, it will stay there for the designated amount of time. After this, you "sparge" the grains, which means rinsing them with a certain amount hot water and draining the wort into your brew pan. From here the process is pretty simple: boil, add hops, cool, transfer to brewing vessel, add yeast, and wait. Voila! Beer. (mmm...beer...)

The conversion of the pot was relatively simple. The brew basket was dropped to the bottom of the pot, fitted with a couple of extra screens (from the Cash and Carry restaurant supply store) and a PVC tube to form a seal at the edges so the grains wouldn't end up where they shouldn't be. A few rubber stoppers raised all this up off the bottom, and the metal percolator tube passed right up through the middle of all this.

Because of the nature of a percolator coffee pot (and coincidental temperature settings) this ends up automating most of the steps in the mash process--to the point where a person could set the thing up in the morning on a timer and have the grains ready to sparge when you got home from work. In the coffee pot system, the grains and cold water are loaded in and the pot plugged in. The water heats in the bottom and gets shot up the tube where it hits the lid and washes down through the grains. After about an hour, our thermometer buried in the grains read 170°, at which point the coffee pot shut itself down. It held temperature for the entire 90 minute conversion. Meanwhile, we heated the sparge water on a little hot plate burner (like you might in an apartment) which was ready to go at the end of the mash (and we didn't even blow a breaker). We sparged and the wort drained right out through the spout at the bottom of the coffee pot into our thirsty brew pot below. Just about as simple as all grain brewing gets. 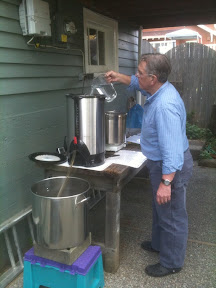 We decided to boil on our high power outdoor gas burner. I've made beer on a hot plate before (in my dorm room, but that's another post for another time). Let me tell you, it takes forever to get 6 gallons to boil on a little hot plate. So we boiled and hopped as we usually do, and then it was time to wait for the fermenting to see if we had just totally ruined a nice big bag of malted barley or if, in fact, we had just revolutionized lazy brewing forever. The specific gravity was right on track for what we were expecting, which was a good sign. But then again, you never know until you taste it.

Come tasting day, we were blown away. We had made a top notch IPA--as good as any we've made the usual way. I was frankly amazed. I was not expecting anything close to a good brew. I figured the coffee pot would burn the wort, or not allow for full sugar conversion, or somehow spoil the process. But, my pessimism was turned around by an beautiful pint of home brew. It doesn't get much better than this. Although, I've heard that there is a way to make whisky in a Crock Pot too.....
Posted by Pastor Erik at 7:41 AM