Man, it has been a long time since I've posted. I always say that I blog a lot more on weeks I'm not preaching, but I didn't preach last Sunday, and no posts.  I'm on vacation this week, so I'd better get something going.  I've had several posts "in the hopper" for a while (meaning I have ideas that haven't found their way to the interwebs) but they just seem to be fermenting slowly.

Speaking of fermenting, that reminds me that I often find it best to get back in the blog habit by writing about beer.  And what a weekend it was for beer.  My wife's grandfather died last week, which accelerated our planned vacation trip to Portland by several days so we could attend the funeral.  But it also meant that my wife's sister and her husband came to town, and (thanks to babysitting grandparents) we got a day to adventure.

It's "Craft Beer Month" in Oregon, an event that culminates in the spectacular "Oregon Brewers Festival" this weekend (which I will miss due to camping, too bad).  But throughout the month are a number of other events and such, and really, every month in Portland is a good one for craft beers.  On our first day here I happened to stumble upon a copy of Portland Monthly Magazine with this irresistible cover: 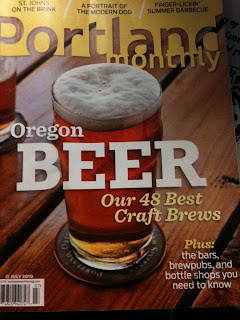 It turns out it was a great issue, with listings for "Best of" for all sorts of things in addition to 48 Best Craft Beers including Best Brewpub, Best Bottle Shop, Best Brewery Tour, etc.  And it became the blueprint for a Portland Craft Beer Adventure.

The first place we decided to check out was "Saraveza" in Northeast Portland. 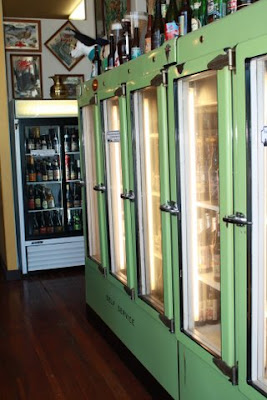 The photo in the magazine (similar to this one my wife took) showed a spectacular retro beer cooler, so I had somehow connected in my head that this was "Best Bottle Shop" but really it was "Best Continental Selection".  Since this was meant to be a Portland Craft Brew Extravaganza, you might think this would have been a fatal mistake, but in fact, this really cool old school pub (with lots of Ranier and Oly kitch lining the walls and shelves) DID have a great bottle shop, with both local and worldwide beers--and we stocked up for the "play at home" portion of the evening.  They also had a wide range on tap, so we decided to split a 5 sample taster between us.

Because the women were with us, I ordered the "Flemish" beer they had on tap as one of our samples, since it sounded like the kind of thing they would like. Normally I avoid Belgians (I know, what kind of beer snob am I?) and I'd never tried a Flemish style, so I gave it a try and was surprised at how good it was.  Before we left we decided to trade out an IPA that we'd picked that was also in the sample tray (turns out it was a LAGER--and tasted like crap. Who makes India Pale Lager anyway?). We wanted to replace it with a Flemish, and since they didn't have the one we'd sampled in bottles, the bartender suggested "Duchess de Bourgogne" and boy, was that a good choice.  This is now one of my new favorites, and makes me think I may even be able to be turned to Belgians. Maybe.

The other great find at Saraveza were these little beer journals they had on the counter for $4. 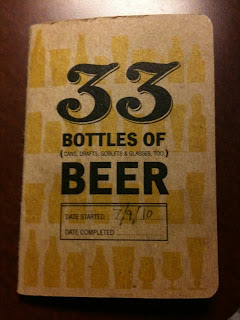 My brother-in-law and I picked up one each, and it turned out to be a lot of fun--our adventure had suddenly become a serious beer geek tasting and grading expedition.  We took it pretty seriously throughout the rest of the day (much to the initial amusement and then growing annoyance by the women-folk).  Here's an example of one such entry (for the aforementioned "Duchess": 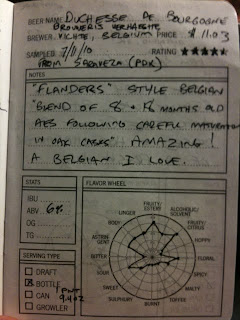 Next stop was Hopworks Urban Brewery for lunch (rated Best Brewpub Overall in the magazine). The real reason we were going was to attempt to see the "bicycle bar" I'd stumbled onto a picture of online last week.  We enjoyed some great pizza and beer (their IPA is now my #3 beer after Diamond Knot IPA and Ninkasi Total Domination IPA).  One big plus for beer geeks with little books, the HUB brewery lists the "stats" for their beers on the menu and on the beer list chalkboard.  My Organic IPA was 6.6% ABV, 75 IBUs, and had an OG of 15.  My wife's "Velvet Underground Imperial Black ESB" was 8.7% ABV (wowza!), 56 IBUs, and had an OG of 21.  Nerdy, nerdy beer fun.

This pub has a whole bicycle theme (I nearly bought the bike jersey, and even more nearly the bike socks) in addition to brewing organic beer, sustainable food, and having a "green" building.  This is a place I would certainly frequent regularly if we lived anywhere around here. But the crowning glory was sweet talking our waitress (after a nice tip) into letting us check out the bike bar.  She arranged it with the brewery (literally downstairs from the pub) and down we went.  The bike was as amazing in person as it was online, and I kinda wanted to take it for a spin.  But I didn't.

But I really wanted to.

During our meal, the beer geeks perused the stack of Northwest Craft Beer related literature we had collected on our adventure thus far as we debated what would be the final stop on this journey.  My brother-in-law and I, reading different local beer magazines (ok, pause for a moment, there are MULTIPLE local magazines, newspapers, etc devoted to beer in Portland.  No wonder people love this city.) Anyhow, we were reading different magazines and both came upon the same ad for an event called "Puckerface" featuring sour beers at a "Beer Cafe" called Belmont Station in another part of town.  Given our fondness for the quite sour Flemish, we thought we'd give that a shot.  As I turned back to the original magazine that started this adventure, I came to realize that this pub is the pouring half of the Belmont Station Bottle Shop, which was actually the one rated "Best Bottle Shop".  And so we were on our way.

We hit the Bottle Shop first, and it was quite spectacular. 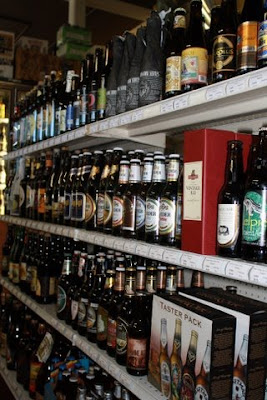 They had TONS of beers (and some wines, including wine in 12oz aluminum cans) at good prices.  And for only $1.50 more the attached pub would pour your recently purchased bottle into a nice clean glass for you to enjoy on site.  But we were here for "Puckerfest" and so bellied up to the bar (just before the crowd came it turns out) and ordered a round to pass and share.  I have to say, I was not that impressed. The beers were sour, for sure, but it reminded me why I don't generally like Belgians.  Meh.

And so, "Puckerfest" completed, we took our trunk full of bottles home to enjoy (and record in our little nerd books) and spent the evening continuing to sample.  But the hands down winner for the day was the "Duchesse de Bourgogne" by all judges--a rare feat in both my house and my brother-in-laws.  But at $11 for a 750ml bottle, this will be a rare treat indeed.  "Leafer Madness (2009 Fresh Hop Edition)" by Bear Valley (in Onterio, OR of all places) was in second place, and fresh hop beers are some of my favorite.  A "fresh hop" is one the brewery brews using hops the same day they are harvested. I find it gives a great aroma and flavor.  Bear Valley even has a video of them harvesting the very hops that went into the bottle we drank. Pretty cool. It's also 9% ABV. Hoppy and warm. Mmmm....

I'm pretty proud of our little team and how we started out by heading to Portland as a way to break up a pretty sad week with a death and a funeral and managed to turn it into a full-fledged beer adventure.  We celebrated "Oregon Craft Beer Month" in true Oregon Craft Beer style, and now can all head back to less beerly-enlightend places of the country (Spokane, WA and Manassas, VA) with the lingering taste of fresh Willamette Valley hops still tingling the backs of our throats (and recorded in extraordinary detail in our little books.)  I just wish the bike-bar was coming along.
Posted by Pastor Erik at 10:05 PM