Notice Name and Nurture with the Methodists--Part 1

I've been asked by the staff of The Fund for Theological Education to blog my expereince of the Notice Name and Nurture “VoCARE” training here at Camp Indianola on Whidbey Island in Washington State. Let me say first, I'm a bit of an anomaly here. First, because I'm a Lutheran surrounded by Methodists. And second because I'm here not in the same capacity of the other participants—who are being trained to lead VoCARE practices in their congregations. I'm here instead because I'm interested in helping put together a similar training among Lutherans. And, this is my second time through this sort of training (that time as an interloper too). But key to this VoCARE training is narrative, so I'm going to start with the story of today instead of continuing these preliminaries.

I woke up this morning in Spokane, WA, which, according to Google is 315 miles from “Camp Indianola” where the retreat/training is being held. My morning began with loading up my children in the car so that I could drop them off with their grandparents who live somewhat near the camp. It pretty quickly became apparent that this little adventure might not go through as planned, when my father called at 7am with the announcement that he had spiked a serious fever in the night and might not be able to watch the kids after all. Telling a 4 year old that the trip to grandma and grandpa's is off just minutes before departure is pretty much the makings of a disaster, so we decided to make the journey even if it meant just staying and helping take care of grandpa. Then while loading the luggage, my two year old managed to find the Children's Motrin in the suitcase I wasn't loading, get through the “childproof” cap (HA!), and pour herself several doses all in the 45 seconds I was outside. One call to poison control later (unlike me, they were reassuringly not very concerned) and we were on our way—5 and a half hours to my parents to drop off the kids, another 30 to the ferry dock—where I missed the ferry I'd meant to get on and so would be late to arrive.

Now I generally use my kids as an excuse for my lateness (and more often than not they are a major factor in it) but the truth is the reason I was late for my ferry (and the conference) was on account of a choice I made. When I got to my parents house and got my kids situated for their visit, my dad pulled out a beat up manila envelope full of old photos he'd found somewhere or other, and began to show them to my four year old and telling the stories of “When grandpa was your age.” And though I knew I'd likely be late because of it, I could not pass up a moment that had the possibility of being a holy one (as it turned out to be). And so the three of us sat there, three generations, looking at photos I had never seen, and hearing stories I'd never heard. It seemed forced to leave an intergenerational story telling session to go to a conference about facilitating intergenerational story telling sessions and so I lingered. And it warms my heart to know that my daughter and her grandpa continued with the photos and stories after I left. 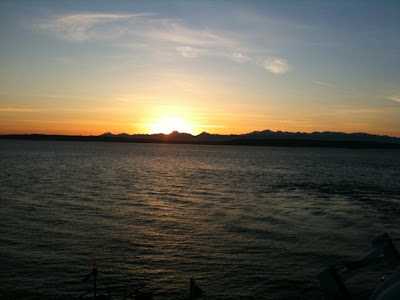 I made it to the ferry, and, as if it were a heavenly voice saying “You have done the right thing for this time and place” I was blessed with the kind of sunset that only happens over the Puget Sound—gazing across the water as the sun sinks slowly over the Olympics bathing everything around in amazing shades of blue, purple, and pink. And suddenly the day's somewhat arduous journey melted into a glorious evening prayer painted across the sky. I breathed it in, a 360 panorama of God's clear presence in the world, got back in my car when we landed and drove down a strange and winding road to arrive at the place where I had been called to go.

I tell you this story for two reasons. First, good pilgrimage stories go something like this one—and the journey to the destination is a key part of the experience. And second, I tell you this story to make you wonder why I would trek 300 miles with two preschool children, and continue onward despite many reasons to just call with my regrets and stay at home (or at least at my folks' house). The choices I've made today reveal something about what is important to me—and are connected to why I'm interested in the work of The Fund for Theological Education and their Calling Congregations initiative.
Posted by Pastor Erik at 4:25 PM